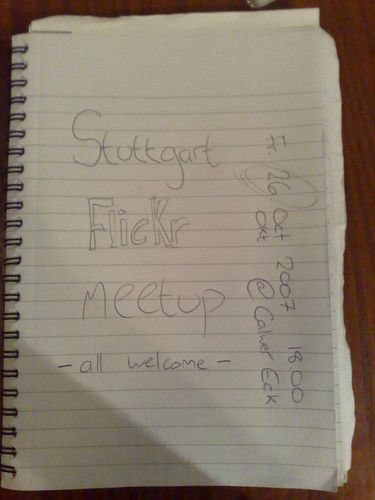 On Friday 26th October there is going to be a Flickr meetup here in Stuttgart. We'll be meeting at 6pm in the Calwer Eck pub in downtown Stuttgart. All are welcome to come along, just leave a comment or add yourself to the event on upcoming.org if you're interested. 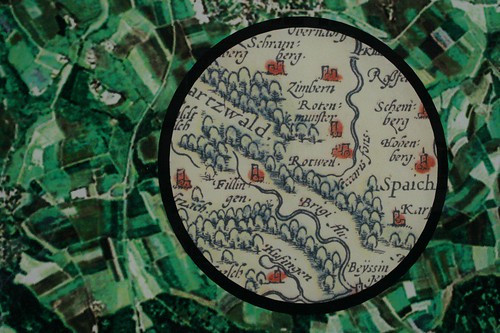 The state surveying office (Landesvermessungsamt Baden-Wuerttemberg) here in Stuttgart has a display on the outside of their building showing satellite imagery covering the length of the Rhein with a number of examples of maps from the places across the region over time. This old map shows some of the area around the Black Forest, or Schwarzwald, just south of here. 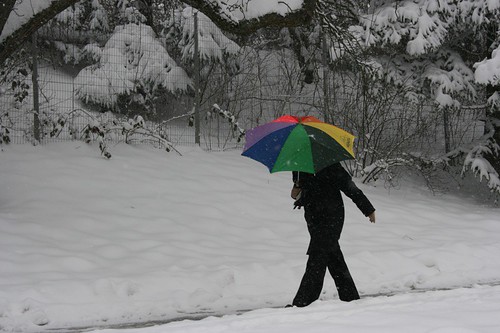 In the past day or so Stuttgart has seen its first proper snow of the year, and it caused chaos. Schneechaos read the headlines. People weren't prepared (presumably they, like I, thought we'd skipped winter completely and gone straight into spring), roads hadn't been swept of overnight snow and buses basically stopped running as far as I can tell.

Luckily I take the train to work. Whilst a little delayed, they were running without too many problems.

Since the Munich mapping weekend a few weeks ago I've been putting some more work in to try and improve the mapping of the centre of Stuttgart in OpenStreetMap.

The image above shows the current state of the map for Stuttgart. It's still missing a lot of information including many of the major roads, mostly because I don't drive here. There were also very few streets in the centre of town until this weekend when I made a conscious effort to go in and collect data for some of the pedestrian areas of the city.

If you're in Stuttgart and interested in helping out with mapping, get in touch. There is GPS data appearing in the area from someone driving around, which acts as a good base for some of the major roads, so if that's you, get in touch and maybe we can work together to make sure they're tagged with street names and the like.

I had known for quite some time that there is an 'English Shop' here in Stuttgart, and have recently been craving some British goods - mostly fish and chips, which just aren't the same outside of the British Isles - and so went into town today to see what they had to offer. In particular, I was looking for some Cadbury's Dairy Milk chocolate, and maybe New Scientist magazine if they had it, as I hadn't seen it in my normal supplier of international magazines for a long time.

Once my feet had all but given up from walking around the town (trying to map the pedestrian areas of the city for the OpenStreetMap project) I decided to go looking for the English Shop. I knew the area it was in so it didn't take me too long to find it.

Walking in, I was greeted by a fridge of British drinks such as Irn Bru, Ribena, Tango and Vimto. Walking in a little further you come to all the typical 'I've been to London' merchandise, like Mind the Gap signs, mugs and things, as well as all sorts of other things with the Union Jack (and other British flags) on them. I wasn't particularly interested in these, so passed on by to see what DVDs they had to rent. (Note to self: must go back and register to get DVDs for 1 Euro a night). Then, on to the section filled with Walkers crisps, biscuits, other things, and of course, the chocolate. When I walked in, I spotted a small selection of chocolate under the counter but didn't see any Cadbury's products, and was a little worried. But the main selection included Dairy Milk along with a good selection of other stuff. Picking up a few things on my way through that aisle, I went to explore the rest of the store, passing the 'fresh' foods (cheese, sausages, etc) and selection of alcohol. I grabbed a can of Ribena and then went to pay.

It all added up quite quickly (the Terry's Chocolate Orange helped in that, at over five Euro) but frankly I think it was worth it. I suspect I'll be back there once in a while.

Still no luck with New Scientist though. If anyone knows of a supplier here in Stuttgart, please do let me know. Or if anyone wants to send me a copy, that'd be welcome too *grin*

I went hunting for my first ever geocache today and found it without too much effort. There were a couple of little goodies in there along with the visitors log. I didn't take anything, but signed my name and left an OpenStreetMap badge to try and spread the word of open mapping to people around Stuttgart who have GPS devices.

My finding the cache brought on a long spell of very heavy rain - not a good thing when at the top of a hill in just a t-shirt! I did manage to walk 12km today though, most of it whilst drenched.

Despite only having the clues for the first cache, I went looking for a few more that were nearby. I got to the location of the first but after a little searching I spotted what looked like a syringe sticking out of the ground and gave up the search. Looking at the clues online later, it seems that the waypoint I'd downloaded to my GPS was just a starting point for finding the cache, so I was looking in the wrong place anyway. On my way home I stopped to find another and was within 50 metres or so of it, but the GPS wasn't working so well under tree cover and kept changing its mind.

Next time I go out geocaching, I think I need to take more of the clues along with me.

Last night there was a festival of light (called Lichterfest in German) being put on here in Stuttgart. I didn't have any other plans, so I had decided to go there with my flatmates. The family of one of my flatmates was also visiting, so there were a party of us going.

We arrived just before the fireworks were to be set off, and had a chance to see some of the lanterns that were being carried around by visitors, and that were hung up around the park. The Killesbergturm had been lit up as well, giving a sort of focal point to the park. Soon, the fireworks were being set off in time to the music (sort of) and everybody was ooh-ing and ah-ing.

It brought back some nice memories of one of the first times (if not the first) that I had visited Switzerland when I was younger, and had a chance to go to a similar festival there. There are some photos on Flickr from last night's event, though I didn't actually get around to taking any myself.

With today being Tynwald Day, the national day of the Isle of Man, and yesterday being Independence Day for Americans, it seems as good a time as any to write about what I've seen in Germany recently in relation to a massively boosted sense of national pride. Or at least visible national pride.

When I first arrived to live in Germany I didn't really notice it. But after a while, and after travelling to a few other places, I noticed a distinct lack of something here in Germany. Flags. Wherever I went there were very few black, red and gold German flags. It was only every now and then that it struck me how few and far between they seemed to be.

Then, in the run up to the World Cup here in Stuttgart, flags started to appear much more regularly. I think it's only natural that football would bring out people's desires to show their support for their team, especially when there are so many other countries coming to visit, each of whom will be doing exactly the same. But it's very strange to suddenly see so many flags, when previously there had been so few.

The sight of so many German flags around has been quite an impressive sight - and actually quite moving. It's not until you talk to local people about the distinct lack of flags - and sudden influx - that you start to realise how difficult it is for some to feel comfortable identifying with such a sense of national pride. The flag, and national pride, still seems to worry some people a little. Often where flags are flown, or identities associated with, they are of the region and not of the country as a whole.

As an outsider, or Auslander as we're known here, it's great to see that national pride, and from people I've spoken to, it gives them perhaps that little boost to know that outsiders see German people's national pride as a really positive thing.

This situation could well be different dependent on where in the country you are, and who you speak to, but it's something I've found fascinating, especially since the onset of the World Cup. It'll be interesting to see what happens with all the flags after the game has finished. I for one hope they keep flying high everywhere you look.

Yesterday marked the start of the 2006 World Cup - WM2006 - and though I wouldn't call myself a football fan as such, I could hardly pass up the opportunity to soak up the atmosphere of a World Cup Host City whilst I'm living in one.

Germany winning the first match against Costa Rica caused a great sea of black, red and gold flags to be flown over the heads of thousands of supporters in Schlossplatz in the heart of Stuttgart.

The latest update I heard - today, in the new Saturn store in the recently refurbished Koenigsbau shopping centre - was that Stuttgart would be getting digital TV (DVB-T) on either 20th or 22nd May. That's either the Saturday, or, more likely the Monday.

Of course, the salesman may just have been pretending to know the actual launch date to try and sell the DVB tuner to the customer in front of me.

Living in London, originally from the Isle of Man, I'm interested in all things geographic and enjoy photography.

I am currently working freelance as a geo & web developer at Geobits, focusing largely on Drupal projects but also keen to take on projects involving mapping or having a geographic focus.

Please note I am not currently available for additional projects