I travelled down to Brighton today for a day of Drupal goodness at the Brighton Area Drupal Camp (#BADCampUK). Living close to London Bridge station, it's a relatively short journey and cheap as well - as long as you know to press that obscure 'FCC only' on the self-service ticket machines.

If you know what you're doing, you can get a day return for £10. If you don't, they'll happily offer you a ticket for almost £25.

If you turn up to a station for a day trip to somewhere, should you really need to understand the complexities of the British railway system just to enable you to buy the best value ticket for your journey? Should you be expected to know what 'FCC only' means so that you know to select that?

My view is that you should you be able to say 'I want to go to Brighton for a day, give me the best price ticket from this station'. You would expect that service from the staff at the ticket counter, so why do they not offer you the same level of service at the machine that's meant to make everyone's life easier?

Presumably there are plenty more examples like this across the British rail network, I just decided to pick on this one because it winds me up each time I travel to Brighton. 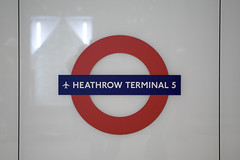 The public opening of the new Terminal 5 at London Heathrow airport is less than a fortnight away and the Queen officially opened it yesterday. I was very pleased to have been given the chance to take a look around while it was in its final stages of preparation the week before last.

Having found the British Airways office, a small group of us (people who had blogged about Terminal 5 or may be interested publicising the opening) were given a tour of the terminal by a BA guide. Paul Parkinson of the This Week in London podcast was also on the tour and gives a great overview of the afternoon in his latest episode, and the terminal5insider has been doing a great job of sharing Terminal 5 photos and videos in the run-up to its public opening.

So, what were my impressions? Looking at the terminal from a distance, it doesn't look all that impressive, and it's only when you approach that you start to realise the sheer scale of the place. Departures are at the top of the building, with a passenger drop off area that gives great views of the countryside out towards Windsor. Entering the terminal via the pedestrian bridges, you start to get a better feel for the building, with a number of floors in view beneath you and an airy departures area welcoming you in. Standing in the main hall, the first thought I had was that it reminded me a little of Stuttgart Airport but on a much larger scale.

The terminal is laid out in such a way (see a diagram on the BBC News guide) that passengers should just flow through from the entrance to the gates with little hassle. In the door, to the self check-in kiosks, drop your bag off at one of the many bag drops and then pass through security to the main shopping and departure area. One thing that I really liked was that even before you go through the usual hassles of security (now even more complex, with biometric information being taken for domestic passengers) you can already see the sky through the glass walls on the other side of the terminal.

Even arriving from the Tube, it looks like there will be a relatively comfortable and short trip from the platform, through the wider than normal ticket barriers, and straight up the escalator to the check-in area.

Transport around the airport is set to be made easier as well, with the introduction of the ULTra PRT (Personal Rapid Transit) system scheduled for 2009, initially taking people to and from the car parks (apparently only for privileged passengers) and later around the rest of the northern side of the Heathrow complex. I also read somewhere that travel on the Tube and Heathrow Express between terminals will be free.

It's obvious from the tour and from the photos that security will be paramount in Terminal 5, with cameras designed into the fittings and signage wherever possible, self check-in desks that have space for a camera to be embedded at some point, the added biometric security, and the new design for X-ray scanning machines that physically separate off anything that needs to be checked by hand (which also has the added disadvantage that it's easy to lose track of where your trays are when passing through), to name just a few of the features.

All in all, I was very impressed with the new terminal building, the only real niggle I had being about the precedence of advertising over information in some places (such as arriving into the baggage collection area to be greeted by an advert instead of pointers to the correct belt, but it's still vastly improved over the design in the other terminals where Vodafone adverts take precedence and you actually have to hunt out the information screens).

I'm looking forward to trying it out as a real passenger, and will probably take the Tube out there to take some photos around the place when it opens to the public on 27th March.

After visiting friends in London over the weekend and getting back to Stuttgart on Monday night, I am once again travelling, but this time to Brussels with work. I'll be here for GovCamp, DrupalCon and BarCamp. I was also hoping to catch up with the OpenStreetMap crowd, some of whom are up here this week for EuroOSCON, but spent much of the day on the train and so missed the meet-up today.

It should be a really interesting week, from watching presentations, learning about parts of Drupal I've not yet delved into deeply, and also getting to meet others in the Drupal community.

I've been thinking for a month or so now about OpenStreetMap and things that I can do to help out the project - besides the data collection and mapping I've been doing since the start of the year.

It all began when I was wondering what the difference in cost would be to an organisation (Futuresonic in this case) between licensing Ordnance Survey data and actually going out and mapping an area themselves.

I wouldn't say the two data sources are directly comparable, but both could meet a given need for an organisation. Often the detail of the OS data would be overkill for orangisations wanting simple maps for context, and potentially very expensive depending on how it's used. OpenStreetMap data, on the other hand, may not have as good coverage - though with time and energy it can be easily extended - but it would be available without the cost.

So, one of the ideas that I've come up with recently is for weekend mapping projects. The basic idea of a weekend mapping project is that I would offer organisations, groups or individuals a weekend of my time to map as much of an area as I could feasibly do in a whole weekend (with extra time afterwards to convert the GPS traces and any annotations such as road names into usable map data).

I think it would be fair to ask for those people to pay for low cost flights from my base to their location, bike rental or something for the actual GPS track collection, and a small amount to cover some cheap accommodation and food for the time I'm there. In return they get free map data onto which they should be able to build, adding their own information and styling to make the maps unique to their own needs.

Why would I offer my limited free time to do this though? Well, quite simply, I really enjoy travelling and seeing new places. I'm also really interested in the idea of open, reusable, community-created content, especially in the form of OpenStreetMap for geographic data, but also Wikipedia for general reference information. So, if I can travel to new places and map them out to help expand the OpenStreetMap dataset, it's hitting on both of those desires in one go.

If anybody is interested, please do get in touch and we can talk through the details.

Updated 15 July with link to page on OSM wiki. Some other community members are interested too, and the more the better as that means sponsors would have a better chance of finding someone close to them, and so have lower travel costs.

Living in London, originally from the Isle of Man, I'm interested in all things geographic and enjoy photography.

I am currently working freelance as a geo & web developer at Geobits, focusing largely on Drupal projects but also keen to take on projects involving mapping or having a geographic focus.

Please note I am not currently available for additional projects